Over Half of Americans Delay or Don’t Get Healthcare

Because They Can’t Afford It 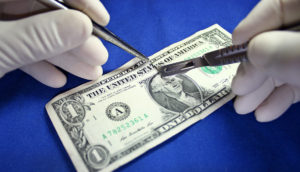 With open enrollment for many medical plans in full swing, health care is top of mind for millions of Americans. But health care is still too expensive for most: A majority of U.S. adults have to delay getting the care they need, or put it off completely, because they can’t afford it, data from financial website Earnin shows.

While, “if you’re healthy, delaying, or even skipping, your annual physical may not be a big deal,” says Earnin, “delaying dental care can be especially costly.” In 2017, according to the Agency for Healthcare Research and Quality, emergency room dental visits cost $1.9 billion. 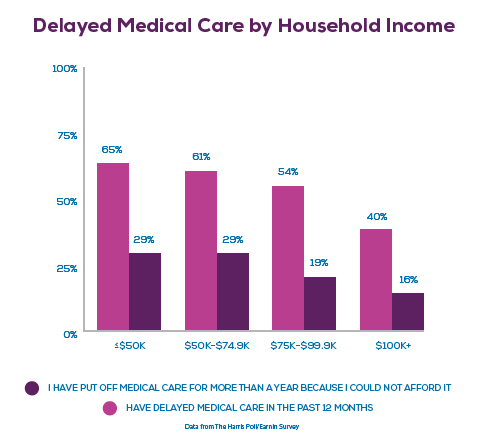 “Student loan debt, credit card debt and personal loans continue to grow,” the report adds, while middle-class incomes have shrunk in all but two states.

As a result of the fact that health care is so expensive in the U.S., many Americans defer treatments they need until they receive a tax refund, assuming they get one at all.

A 2018 JPMorgan Chase & Co. study found a “dramatic link between health-care spending and tax refunds” citing that “consumers’ spending on health care was significantly affected by cash-flow dynamics” since they increased out-of-pocket spending by 60 percent in the week after getting a refund.

Overall, about half of Americans, or 49 percent, say their health tends to take a back seat to other financial obligations, says Earnin.

This is an issue that’s particularly pressing in the U.S., the only “very highly developed country” without universal health care. The nation spent almost 18 percent of its gross domestic product on health care in 2016, while the average spending of 11 comparable countries was only 11.5 percent. Per capita, the U.S. spent $9,403, nearly double what the others spent.

Yet, analysts say, results were “not so good.”

If you’re having trouble paying for health care, or managing money in general, see whether it’s possible to take steps to feel more financially stable, starting withbuilding an emergency fund. Financial expert and former CNBC host Suze Orman recommends one that could float you for eight or even 12 months if necessary. As Orman puts it, “You need to know that you are going to be secure.”

article written by  Shawn M. Carter and published by CNBC